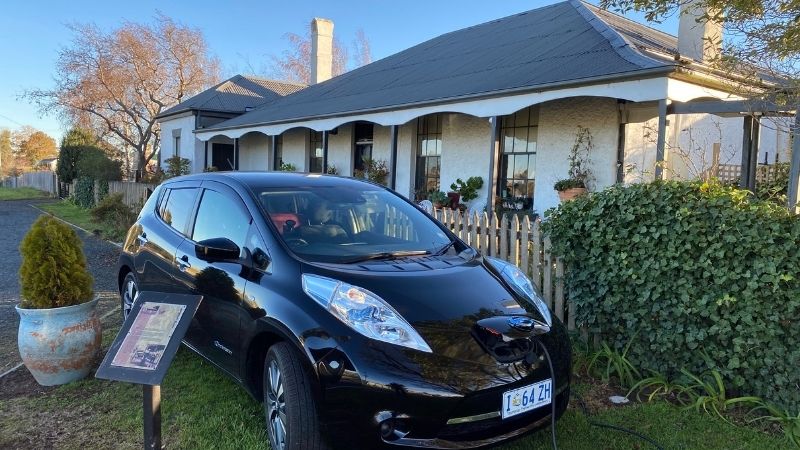 A guest post from Robert Gavin and Di Elliffe, owners of Evie the Nissan Leaf, who recently took them all the way from Hobart to the Northern Beaches. Rob and Di participated in the Good Car Company‘s first community bulk buy.

We are not frequent car drivers. Our preference is for active transport – riding our electric bicycles and walking – around our hometown (Hobart) and when we are in Curl Curl we use our Brompton folding bicycles, and public transport for longer trips.

But, like most families, we occasionally find a car convenient … so when our existing fuel sipping car was due for a trade-in we took advantage of The Good Car Co bulk electric vehicle purchase of second hand imported Nissan Leaf sedans – and so Evie joined our household in May 2020.

The Good Car Co is a Tasmanian-based initiative giving Australians access to reliable, affordable second hand electric cars. Register here to find out how you could be part of their next bulk buy, or join us at ‘Accelerate your transition’, our free webinar on electric transport.

Evie is a 2017 Nissan Leaf with a 30kWh battery. When we bought her she had done 13,000 kilometres, and she cost $30,000 … effectively, almost a new car at just over half the price of a current model. Inside and out, she was in perfect condition, and The Good Car Co ensure the battery is at least 85% useable prior to purchase. The cost included purchase, shipping to Australia, conversion to Australian standards, and insurance while in transit – all handled by The Good Car Co.

Her first job was to help us move all our household goods into storage. The back seats fold down to provide a good volume of space (though a little odd in shape). Evie excelled at this task, quietly running to and from our store with countless loads of boxes. Around Hobart she averaged 7.2 kms per kilowatt hour (30 kWh battery, so a notional range of 210 kilometres, though in practice this was closer to 170 kms for us). We charged her at home where we had off street parking and access to a household power point and our own solar panels.

Her second job was to take us to Sydney in June. Being a city girl, a road trip was a bit of a stretch for a Leaf like Evie, but we quickly found that, as long as we were prepared to take it easy and enjoy the trip, the journey with Evie was a treat.

We stayed in a small B&B in Campbelltown, Tasmania, to break our journey to Devonport where we caught the ferry. This had to be done because the distance between the fast chargers in Hobart and Launceston was greater than Evie’s range, so she needed a slow (overnight) charge somewhere along the way. On our return, this will not be a problem because Campbelltown now has its own fast charger.

A fast charger will recharge her batteries from low to full in 20-30 minutes. An overnight charge on a domestic power point (10 amp) will take about 12 hours.

In Melbourne we charged up in Coburg and headed North. Like Tasmania, Victoria does not have a well developed fast charging network yet (and it was very frustrating driving past countless petrol stations along the way to the next fast charger … When are we going to grasp the future?).

Using the app “Plugshare”, we plotted our trip based on available charging stations. In Victoria we stopped at Seymour Park (which had a 15 amp plug, effectively almost twice as fast as a 10 amp plug) and then at a fast charger in Euroa. The Seymour Park stop was for three hours, which allowed us to do a great walk along the Goulburn river while waiting … an EV gets you fit as well!

Travelling at speed is a big drain on the battery, and we found our optimum cruising speed with Evie turns out to be between 85 to 95 kph. At that speed we could achieve a theoretical 150 km range comfortably. Given the slower travel speed, if an alternative route was available we would always choose it over the freeway – and fortunately, the old Melbourne to Sydney road is still running close by for much of the trip. It winds its way through the countryside and it is a pleasant, quiet and comfortable alternative road to use.

After spending the night in Wangaratta we headed off into NSW via Albury. Once in New South Wales we were pleased to find that the NRMA has had the foresight to build a network of fast chargers to compliment the commercial chargers already available. As a result, plotting a route for an electric vehicle of Evie’s range all the way to Sydney is easily done. We stopped at Yass for the night, ready to head into our destination the next day after an overnight slow charge.

On average we were charging Evie up three times a day to allow for contingencies. Just as well, actually, because we had a minor drama at Tarcutta where a fast charger was not working properly and we could not charge up at all … so we had to drive relatively slowly to the dog on the tuckerbox (Gundagai) for our next charge.

While frequent fast charges are not a problem, doing four of them in one day, combined with fast driving at 110, almost sent the temperature of our batteries into the red zone (there is a temperature gauge for the batteries on the dashboard), so I learned to enjoy the slower pace the car is more comfortable with.

Entering Sydney, Evie came into her own and it was a pleasant drive through the suburban highways from the South up to Curl Curl. By the time we reached our destination she had reached 6.9 kms per kWh, nearly the same result as suburban driving around Hobart. It cost us just over $20 for energy for the entire trip (charging overnight at motels is included in the tariff, and NRMA fast chargers are free at the moment).

Living and driving around Curl Curl for three months, we have enjoyed having Evie there when we need her. In suburban Sydney she is now achieving 7.6 km per kWh and we charge her up during the day, at home, taking advantage of home solar to get free energy from the sun. We charge up about once a fortnight. Best of all, it is really satisfying to know we are travelling in Evie without contributing anything towards global warming.

Our shopping centre has given six priority spaces to electric vehicles (Stocklands, Balgowlah), so it is always easy to get a park there, and if we are going any distance (over 100 kms) there is always a fast charger somewhere along the way for a top up if necessary.

In summary, a 30kWh Leaf is an ideal runabout for everyday suburban driving. It is easy to drive and has more than enough energy for a full day of commuting. Being 100% electric, the mechanics are simple and reliable. Nissan also produce a small electric van which can come configured with five or seven “fold away” seats. These are also imported by The Good Car Co at a good price. Although second hand, these cars look and feel like new, and will easily pay for themselves in fuel savings over their life. If you must have more range, the newer Leaf models they import have 40kWh and 62kWh batteries which match petrol car ranges, but at an extra price.

The Good Car Co are a pleasure to deal with. Anthony, Anton and Sam are passionate about transitioning away from carbon based transport and they have worked out a successful business model that everyone (including the planet) benefits from.

Robert and Di are leaders in climate activism in Tasmania. They volunteer with Bicycle Network Tasmania and Coast Watchers and are setting up Australia’s first community owned electric vehicle carshare for an apartment block in Hobart.

The Good Car Co is a Tasmanian-based initiative giving Australians access to reliable, affordable second hand electric cars. Register here to find out how you could be part of their next bulk buy, or join us at our next EV webinar, where Anthony and Anton will be our guest speakers.

One thought on “Evie’s Big Trip”